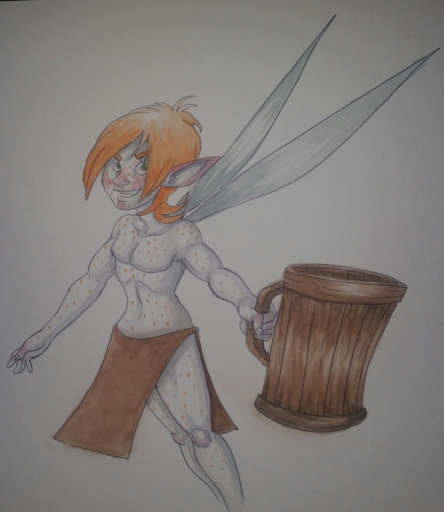 It was no fairy ring of toadstools
through which ol’ Cooligan did pass,
but rather that ring of old fools
through the circle of a shotglass.
Tottering up from the bar, all a’ swaying,
he demanded another shot of sin,
but Angie knew he was never one for paying,
and denied him thus, whereupon he did but grin.
He wondered aloud what color was her hair
beneath her plaid skirts and garments
and so some men took him, with very little care,
and tossed him out, with the other varmints.

“Fleas on all ye balls!” Cooligan yelled,
picking himself up from the shamrock patch.
He looked about himself as the church belled
and he lit himself a roll with a broken match.
It was late in the evening, near to dusk,
and Cooligan went a’walking down the lane,
lighting his way with his cigar husk
and smoking it until nought did remain.
A splash of shadow wet the world
and soon the sun drowned in the murk,
and Cooligan sang as he kicked and twirled,
never him minding evil things that lurk.

“Tis’ a rotten world I know,” he said,
kicking a field mouse that flew in his path,
“And it weighs upon my sloshing head.”
He sniffed at himself, realizing he needed a bath.
The day darkened at last to night,
like a head overcome with its thick beer,
and soon the cigar between his overbite
extinguished to smoke, shadows drawing near.
The moon rose and the stars shined
and Cooligan loped on down the road,
thinking of Angie, and her comely behind,
and yelping at the touch of a hopping toad.

As stars wheeled in the moon-misty sky
and Cooligan’s head wheeled in wonder,
a fairy happened by, mischief in its eye,
thinking Cooligan a right bit of plunder.
“Hail, Cooligan!” the little fairy cried.
“A sodden sot with shite stuffed ear to ear!”
Cussing a storm, Cooligan glanced side to side,
looking for he who had spoken such without fear.
“Step forth, you bloody bastard,” Cooligan roared,
“and I will show you who’s full of shite!”
Cooligan swung his fists as if fighting a horde,
punching and kicking with all of his might.

The fairy laughed and mocked, spiraling about
while Cooligan tussled with the shadows and the air,
then the fairy sat on a tree limb, giving a shout:
“You seem a man with a bee up his derriere!”
Cooligan struck a tree with his fist, groaning,
“I’ll kill you soon enough, you whore’s son!”
but then he fell upon the roadside, moaning,
his fury unspent, but his body overdone.
Heaving and breathing like a woman after labor,
he lay there a while, staring up at the moon’s glow
and wishing he had in his hands a sweet-singing saber
to unsheathe and run through his taunting foe.

The fairy watched him a while longer, then grinned,
saying, “How about a drink to set things right?
I have me own draught with which to amend
my trespass upon you, my friend, this night.”
Cooligan wanted to tell him to go piss off,
but he knew he hadn’t the strength to pass up
any liquor, even if served in a trough,
and so he accepted his foe’s wooden cup.
And what a cup! What a liquor!
It was better than Cooligan ever tasted,
and though it was thick as a dead tree’s ichor,
he drank it dry—not a drop of it wasted.

“And here is my atonement,” the fairy said,
“for that cup shall never go dry for long,
but will fill up as soon as it goes to your head—
always the same amount, always just as strong.”
What the fairy said was soon proven true,
for the wooden cup refilled soon thereafter,
and Cooligan eagerly drank this draught, too,
and then the next, deaf to the fairy’s laughter.
He drank all night, and into the dawn,
staggering into town with a grin on his face,
drinking and drinking, like a rain-flooded lawn—
soppy and sloppy and wet all over the place.

“I have what no one else does!” Cooligan proclaimed.
“I have a cup that never, ever empties!”
And like a man who has never been ashamed,
he undid his trousers to loose his overladen lees.
A great commotion arose in the Irish town
because of Cooligan’s uncouth behavior,
and Father Flanagan came, his face a frown
as he exhorted him with thoughts of the Savior.
He said, “The only cup you should truly drink from
is that of Jesus Christ, God’s one and only Son.”
Cooligan spoke to the priest as if he was dumb:
“Christ’s love is finite, whereas this doth overrun!”

Soon enough Cooligan was doing nothing at all
except drinking and pissing both far and wide,
ruining crops worse than the coming Fall
and the stores to hold over the Winter-tide.
Millstones crumbled when touched by his piss
and crops withered from a blight before unknown,
whereas Cooligan drank and drank, never remiss
to shower the countryside with a rain all his own.
His neighbors all feared the coming famine
and so plotted to imprison Cooligan anon,
catching him in a net, like a slippery salmon,
and dragging him to church at the brink of dawn.

Taking his wooden cup, they were all shocked
when he pissed aplenty as if still drinking overmuch
so that his bladder yet brimmed, too overstocked
with the fairy liquor he could no longer touch.
They looked in the cup, and saw to their surprise
neither dregs nor wetness marked wood or inlay,
and so, hardly believing the import of their eyes,
concluded he had been pissing his own wits away!
This proved true as Cooligan withered and drooled
within the confession booth wherein he was bound,
and soon all his sense and reason were overruled
as his eyes emptied and his head lolled around.

“He will soon die,” one of the men remarked.
“And a good riddance, too!” another man said.
“That’s not how a Christian talks!” the priest barked.
The men withdrew, guilt and shame upon each head.
The priest then went into the receiving booth
and tried to draw out Cooligan’s last confession.
“Please, Cooligan, tell me all that is your truth
so I may forgive your sins in this last session.”
The little fairy sat upon Cooligan’s shoulder
and spoke to the priest, telling him heinous lies
about Cooligan’s sins, the next lie bolder
than the last, until the priest beseeched the skies.

“Oh Lord, God in Heaven, whom hath seen it just
to punish this man for his outrageous deeds,
please deliver him from his sins of wrath and lust
and intemperance and all that such breeds!”
Upon this utterance the fairy glowed bright
and absconded with Cooligan’s insensate body,
taking him to Faerie, while the priest saw the light
and marveled at the miracle of the God he
loved and served; Whom somehow forgave him
who had drank his countrymen into abject woe,
meanwhile Cooligan woke, weak of limb
and in the power of his diminutive foe.