Kicking acorns as they run,
three barefoot boys in the woods;
the dawn gilded with the sun,
stretching shadows like the hoods
of Fae watchers between trees,
the Autumn leaves laid beneath
and, through the glade, the cold breeze
whispers of late Summer’s grief,
yet the children laugh and play
without worries from the wind;
before them lay a long day
and they cannot see its end.
The Winter waits like a hawk,
its talons sharp with its frets,
gripping youths until they squawk
and men aching with regrets.
But rousing by slow degrees,
the Winter remains aloof
and a boy never quite sees,
observing too late the truth
when Winter’s beak pecks between
his ribs with keen hunger pangs,
its wings outspread, and the sheen
of icicled overhangs.
No more barefooted dog-days
when the raptor reigns supreme,
hunting boys in bitter days—
Summer but a distant dream.

A cluster of elms,
gowned like giggling belles, curtsy
to the passing breeze.

How like children in full run
neath the ever-fixed sun,
and the daylight hours never done.

How like finches in the sky
twittering love’s lullaby
over the barley and the rye.

How like gold koi in the lake,
scales sparkling while wavelets wake
and eternity in their make.

How like the buck and the doe,
leaves above, lilies below,
frolicking wherever we go.

How like a husband and wife,
forever this lovely life,
never fearing Time’s reaping scythe.

When high or low, green or gold,
we are as children grown old
as the Summers of true love hold.

Should it end, this Summertime,
and chill to a colder clime,
yet would love glow gold on the rime.


The horned moon glosses the barn’s roof
with a soft light, like dew upon a lawn,
and silent falls beastly snout and huddled hoof
in those long dreaming hours before the dawn.

Across harvested fields where hay bales lay
hunkered down and wound round unto golden rolls,
there are bonfires flaring, as on Beltane day
when flames flicker fulsome upon the knolls.

Ringed round each heat-hearted, tree-fed fire
there dance the antlered people of an old county
to celebrate with foot and voice and strumming lyre
the crops that have sprouted as Summer’s bounty.

With pagan heartbeats and ancestral bones
they twirl together to make the Midsummer merry,
and though there loom no great standing stones
they remember the isle that is yet kin to Faerie.

By the breastplate of Boudicca and Cuchulainn’s cloak,
by the crib of Fin M’Coul and Epona’s stride,
they remember while flames and shadow both soak
their faces like sunset on Avalon’s dark tide.

And when the druid moon retires, at last, to bed
at the hour of the cock’s intrepid crow,
they rise from sleep, each baptized head
still awash with the pulsating pagan glow.

And with them they bring the ancient ghosts
to their Sunday church mass, among the pews,
and sit them down like humblebrag hosts
to dehorn themselves of their moon-crowned views. 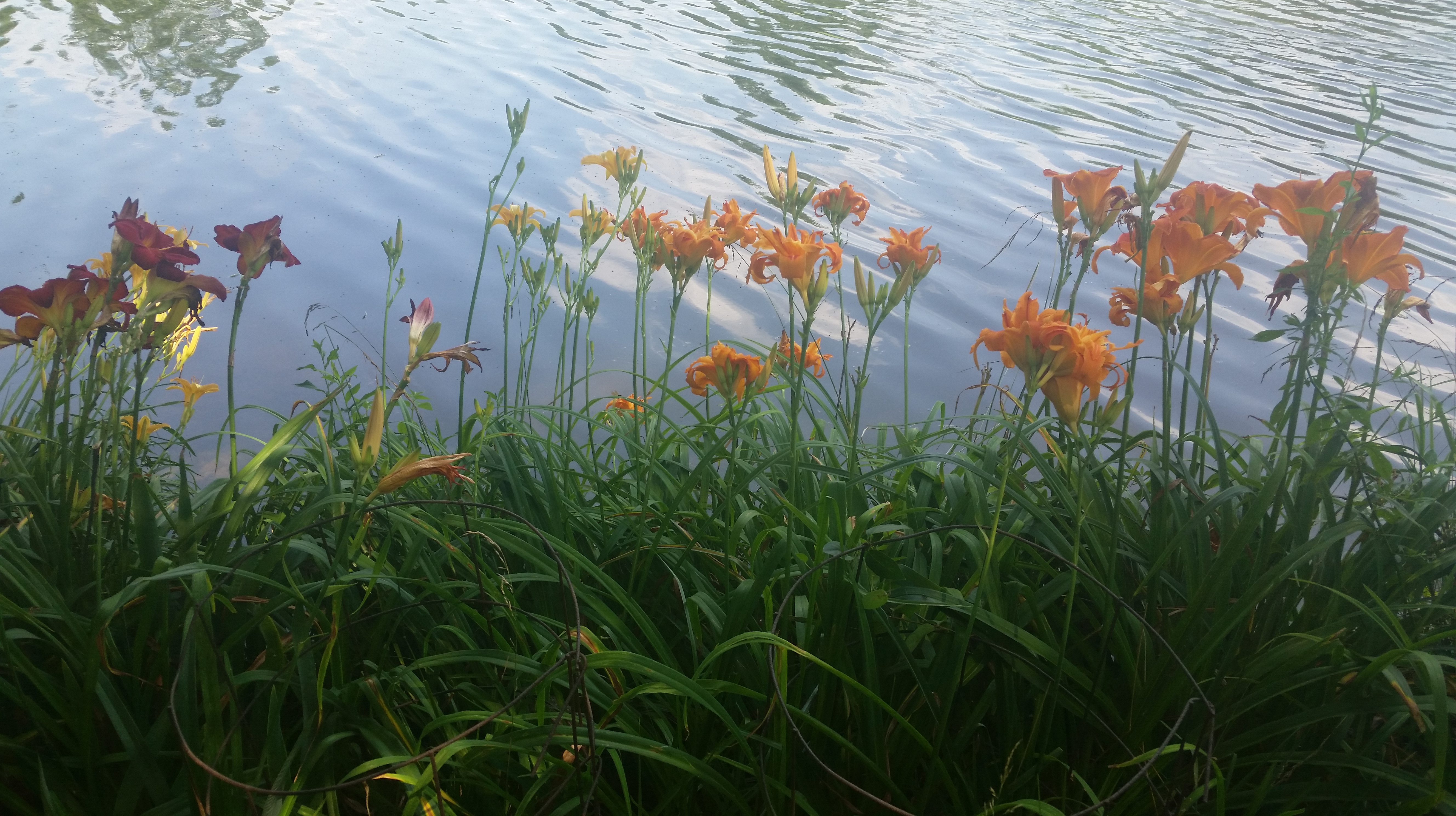 Daylilies by the crystal lake
where grow green ribbons fair
and the glossy wavelets billow and break
with a soft sigh of Summer’s air.

You are flame-crowned, unfolding stars
bowing heads low in thanks
from ditches and roads, unheeding the cars
and bobbing along river banks.

Daylilies of daydream delights,
carry in you the day
and its glow, even in the darkest nights—
I would be as you, if I may,
growing you where I lay,
in darkness where I may someday lay.

How warm and playful the Summer breeze
as if a kitten nestling the earth,
the world a ball of yarn at ease
in the kitten’s cuddling mirth.
But while at first the puff-padded paws
hug the world with nought but friendly play
they soon extend their icy claws—
Winter clasps its helpless prey.

The hay bale hunkered upon the hillside,
wound round within itself, tight and yet soft,
gilded with the sun gleaming along its hide
or shaded by passing clouds, fat and floating aloft.
Beneath it, a green wildfire of grass rolled like a wave
spreading downhill before relaxing as if unto a bed
below a blue sky yawning like an airy cave
and trees gathered afar, bowing each heavy head.
I am akin to you, my silent, stoic hay bale,
basking in the light of of another dawn,
like rays of the sun pooled into a funneling pail
and sleeping atop the foothills, threshed and drawn
unto a woven spool of Summer, coiled and aglow,
or soggy in the cold rains of weepy Fall,
or bearded with the white blankness of snow
when the somber black and white Winter rules over all.
And yet, even then your heart is Summery and warm,
feeding the animals as they await the Spring,
and thus feeding us all through Winter’s storm,
until ice has melted and winds no longer sting.
Kin, see how both of us, after a heavy dew,
give rise to dream mists in the cooling night,
fuming a fog of ghosts in a boggy brew
that lasts as daydreams linger in the morning light?
If only the child-hearted would delight in my mind
as they do you, climbing the curvature of your flanks,
or rolling you downhill, as they all run behind,
laughing to see you leap in joy, and in thanks.

I am the rain,
teardrops on the window pane,
swelling the river with rushing water
to drown the farmer’s little daughter.
I blind the commuting father of three
so he hydroplanes into a tree,
and I dampen the California hills
until the mudslide slips and and drips and spills,
smashing the house while the children sleep
and burying them down in the damp and the deep.
I flood the sewage in the swirling storm drains
until refuse rises along the lanes
and everyone sickens from drinking
the bad water, foul and stinking.
I drown the prospering fields
and all of their harvest yields.
I breathe fog up from the grass
until you cannot see where you pass
so you stumble down the ravine
opening up beneath you, hitherto unseen.

I am the rain
helping to grow the grain
and tapping on the tin roof
like fairy feet, small and aloof.
I renew lakes, creeks, and rivers,
being among the most selfless givers,
letting you drink me to quench your thirst
and being, perhaps, the one to baptize you first,
kissing your brow, your nose, your chin, your cheeks
with many plops and pecks and trickling streaks,
and hushing you with my pitter-patter
while speaking with a gentle smatter
as you lay yourself down to sleep—
much better counting me than sheep.
I cool your brow on hot Summer days
and refract the sun’s shining rays
to festoon the earth with a spectral bow
as if ribbons were made from their glow.
I shower the Spring with its due
so it may blossom to a lovely view.

I am the rain,
feeling no regret or disdain
nor sadness or madness or reason;
I am indifferent in every season.
I fall where I fall,
over some, over none,
over one and over all,
laying still, or on the run,
my work is never done.