The attire of ideals ill-fit
in times of turmoil, times of want,
when hunger loosens a belt till it
slips to the ground, and we are gaunt,
nought but haggard skin, brittle bones,
starved from famines unbeholden
to kings sitting on their grand thrones
or prayer books long grown olden.
No, we waste thinner and clothing
slips off—robes, uniforms, and suits,
each badge, medal, and just-so thing
once honored by waxed marching boots
to give the semblance of order,
of hierarchy, place, power,
enforcing each make-believe border
between so-and-so in his tower.
The cufflinks slip off the narrowed wrist
like overlarge shackles from a beast
and the noblest scion cannot resist
the promise of the scantiest feast.
He springs, shedding old pretenses
like a Winter pelt cumbering
his hunt in Summer, his senses
overwhelmed after slumbering.
Even ladies doff their dresses,
their waists too small for bodices
as they prowl, twigs in their tresses,
wild-eyed like pagan goddesses,
seeking the next morsel to eat
to sate the pit between their ribs,
etiquette lost, thinking of meat
rather than wedding rings and cribs.
And children—children become ghouls
perching over impromptu graves,
soiled, feral, clutching bloody tools
while sheltering in charnel caves
to lick at cleaved skulls long bereft
of sustenance, the gray matter
drained, sucked to dry dust, nothing left,
though the children grow no fatter.
And so the ideals are piled high
like clothing for the End-Times pyre,
burning, smoke blackening the sky
as the starved and the cold aspire
to make a feast of their brethren—
naked, emaciated, stripped
by the hunger pangs and the ken
bestowed by the maw of the crypt.

Human husks are scattered by the wind
like the crimson leaves of a final Fall
in the arid wastes at the world’s End,
while answers the angels’ clarion call
a large shadow to eclipse the sun,
its wingstroke a storm to blast the lands
and the great Behemoth on the run
so neither city, town, nor house still stands,
and swooping over seas where wallows
the Leviathan with its monstrous mouth
to encircle the earth it swallows
engorging from West to East, North to South—
the Bird of Ziz flies just overhead
with a raptor’s inescapable sight
scouring the multitudinous dead
and bringing with it an Eternal Night. 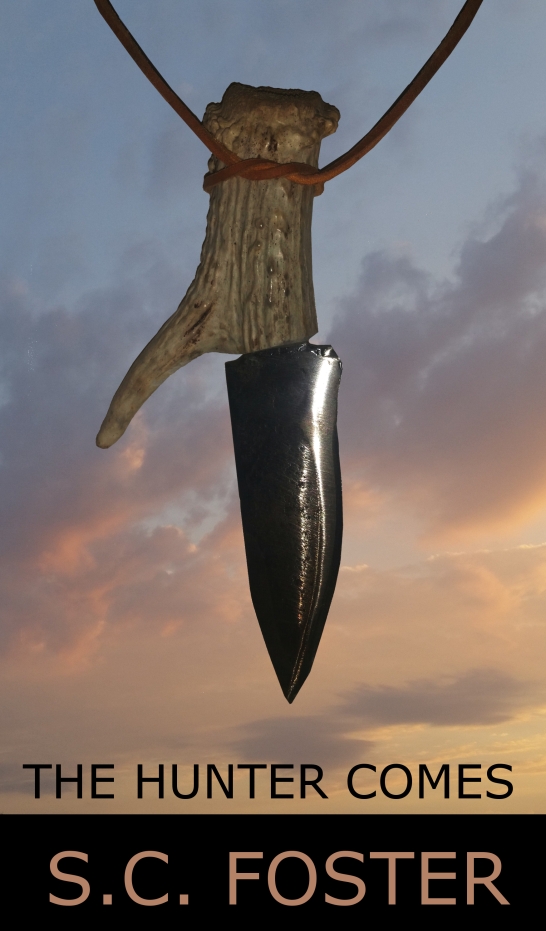 I am currently designing covers for the sequel to my Native American Myth/Apocalypse/Romance/Horror/kitchen sink series, The Dark Dreamer.  I am trying to refocus myself toward completing the sequel, although why I should when the first book has been largely ignored must be ascribed to monomania and ego gratification.  Below is the prologue to the second book.  The first book, “The Dark Dreamer”, is available in kindle and paperback format on Amazon under my pseudonym S.C. Foster.  It is written from the perspective of a woman named Madeline Greer.  The series will eventually be a trilogy, or so I hope.

I dreamed that I was a woman fleeing through fallen leaves from a wrecked truck. A man was in front of me, pulling me by the wrist as something large and frightening chased after us. The trees quivered and the earth rumbled. Cold gales blasted the trees and chilled me to my bones, howling like wolves on the hunt. I glanced back and saw the giant bounding after us, each stomping step a tremor that shook more leaves from the trees. His voice boomed like artillery shells.
“I will slay all monsters, Malsum!” the giant called.
“He is not Malsum,” I cried. “He is Glooskap!”
The giant did not listen to me. I heard the tightening of a bow— like an old tree creaking in foul winds— and the man that led me shoved me aside.
“Run away from me!” he cried. “He is only after me!”
I did what he told me to do, veering far afield of him. Suddenly, the night sky exploded with light as a great crackling arrow shorn the shadow-heavy forest. Trees exploded and leaves scattered. I was thrown face-first into the moss. Dizzied and disoriented, I rose to my feet, trembling.
“Harry!” I cried.
“Run, Maddie!” his voice answered me. “Go!”
I wanted to run to him, not away from him.
Another lightning bolt illuminated the forest and exploded, blooming as a ball of light that showered the trees in light and fire. I was thrown once again as the blinding white radiance tore through the foliage and set them aflame. Leaning against a tree for support, I stood and looked in the conflagration for the man I had called Harry. I saw the giant striding through the forest, his lope as calm and assured as a hunter who had downed a buck with a single bullet to the heart. I saw Harry’s body laying upon the ground, unmoving amidst the inferno. He was smoking and bloody, his chest black and red like his flannel shirt. I called out to him.
“Harry! Get up!”
He did not hear me, nor did he respond to the booming tread of the giant that came for him, stooping over.
“Get away from him!” I screamed.
The giant paused. He regarded me with an impassive eye, then lifted Harry by his feet, dangling him in one hand. Harry was limp and unconscious, swaying side to side with the movements of the giant. The giant appeared to be a regular man, but taller than a water tower. His animal-skin boots were large enough to cover a car. Over his shoulders was a buffalo’s hide. Atop his head was a crown of colossal antlers. He leaned over me, peering at me closely— his face painted with red streaks of what smelled like blood.
“Harry,” I whimpered.
The limp man stirred. Hanging upside-down, he glanced about wildly. There appeared in his hands a gray fur blanket. While the giant peered at me, Harry drew the blanket over his head, disappearing into its expanding folds.
Something happened to him, then. I did not understand it, but it was a dream so there was no logic to it anyway. One moment he was a man and the next he was a large wolf. He bit into the giant’s hands, mauling his fingers until the giant roared and flung him away. The giant then readied his bow, a lightning bolt striking the arrow and electrifying the night sky. When he unloosed the arrow the sky ruptured with blinding fulgurations.

How long did they believe their works would last?
How many hands would their scrolls travel along
through history to be read and rewritten from Alexandria’s past
so we, today, could benefit from that library’s innumerable throng?
None, it would seem, for though Man sought to ensure all,
Man also sought to destroy with fire to complete the raid,
and today we wish to believe our knowledge can endure all
with smart machines, yet there approaches a global fire, also Manmade,
and no firewall will save our cybernetic caches
of Science and Literature and Art
from being scattered in futile ashes
when we have scorched this planet to its heart.