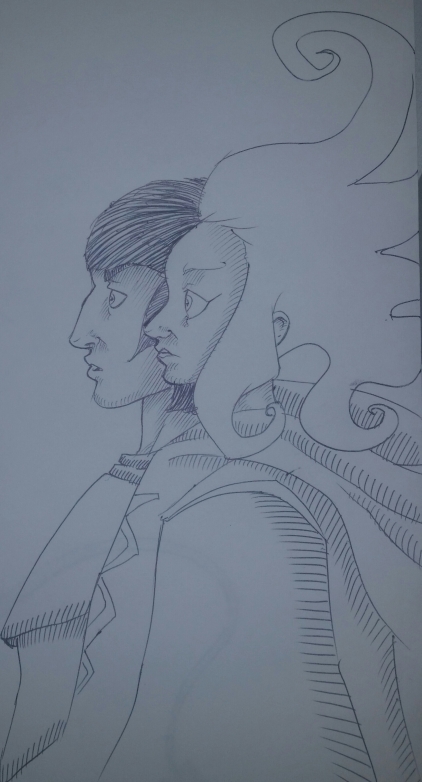 The Lady of Lorwynne regained her spirits enough the next day to eat. She was not as happy with the fare offered by the swamp as Edea’s family, but she thanked her host nonetheless and ate what she could with the gratitude remaining in her. She did not talk, but she did listen to the children play in the tower. Their laughter spiraled up the tower like a flock of birds, nesting there in a gaggle for a happy hour or two. Listening to them, she wished that Eseus had had more time as a child to play games— more time for games and laughter and happiness.
Duty had been an omnipresent tyrant worse than any Valorian emperor.
Meanwhile, Iadne held the clew in her robe, and awaited its growth. It swelled, as did her silent rage. She wished she knew how she might steal Eseus back from his cruel cousin. Yet, she had no standing army, nor could she convince Eseus to abandon his people. All she had left was his child, growing within her womb alongside her rage.
Edea attempted to console Iadne and the Lady of Lorwynne with the help of her children and grandchildren. Such attempts allayed the pain and the rage for a time, but the ebbing of such tides always gave way to flow afterwards in Iadne’s heart. When she had no other recourse, she turned the clew over and over again in her hands, Willing upon it wrathfully.
Days passed slowly, and the nights even slower. Iadne recalled what Percevis had said about the labyrinth that was time, and she could feel the walls slowly pressing from all sides.

All of the Oxenford peasants were arranged on either side of the Road to greet the caravan as it arrived. They cheered as if their very lives depended upon such a raucous display, and so their lives did. Though they smiled and shouted jubilantly, fear haunted every visage, gleaming in each eye like daggers readied at their throats. Pomp and pageantry abounded as if to further humiliate Eseus, but he was too dejected to be indignant as he was marched toward his cousin, sitting exultant upon her silver throne as four large men carried her into the Oxenford courtyard.
Eseus hated her, but he hated himself more. He had betrayed his mother and Iadne. He only hoped they had made it safely away from the soldiers without injury. He knew Iadne would see to the rest, being wise to the moorlands. He hoped both would forgive him in time.
His father had warned him that to rule was not a privilege, but a needful sacrifice; or so it should be for any noble and just ruler. He hoped his father would be proud of him, even as his son was held by his enemy, steeped in his shame. Swallowing his pride, Eseus knelt before his cousin and pleaded for the lives of his people.
“Dear cousin,” he said, “though I have raised arms against you, it was to protect my people, and now that they are hither brought to you, please pardon them for my misdeeds.”
Kareth wore a tiara upon her brow, woven of a whitish silver found only in the Sinking Mines of the moorlands. It was intricately molded in beauteous facsimile of flowers and vines. Opals, like glittering poison berries, were entwined among the spiraling leaves and stems.
“You have accomplished much,” she said, her smile never faltering. “So much to oppose me…and yet, a pebble was never a dam against the river. The waters carry it away as well, overlooked in the rapids. Thus, Fate cannot be overwritten. So. Here we are. Heir to Oxenford and heir to Lorwynne. Do you wish to parley? I believe you have earned that much. Indeed, I was quite surprised at your resourcefulness.. And you were quite the warrior in the battle. But you were destined to be overtaken, cousin, and regardless of your best efforts you achieved a mere protraction both needless and vexing. But vexing to yourself, for it amounted to little more than suffering. Take, for instance, the fact that had you simply allowed my preliminary party to assume control of the castle, not one father, son, brother, or grandfather need to have died. You needed only allow Commander Vant free rein and spared countless lives. But, no, your stubbornness prevailed and because of it over a thousand men are now dead. A thousand men that could have served me loyally had their Lord been possessed of more insight into the truth that towered over him like an ill-tempered god.”

The marriage ceremony was brief. No one challenged Eseus thereafter; not even those among the Crow clan that were doubtlessly present, disguised among the peasantry. The Oxenford family scowled as Eseus and Kareth were wed before the Matharist priest. Fear stayed their tongues, nonetheless, and they were was impotent to stop the ceremony as they were to stop the sun rising and falling. Kareth took pleasure in the outrage so visibly etched on their silent faces. She would marry the man who allegedly conspired to slay her father? Yes, she would, if only because no one else dared to challenge him for her hand. Even wounded, Eseus intimidated them all. Their shame, too, seemed to please her, and she smiled to see their chagrined grimaces; their eyes averted in confusion and humiliation.
Thereafter came the festivities, including the Flight of the Bulls. Several young peasant men and soldiers stripped to their undergarments and were led into a large pen of palisades, their sharp stake teeth pointed inward. There awaited them a large bull antagonized by whips and canes. It charged about wildly, snorting and bellowing as it rampaged in every direction. Seeing the men, its fury found focus and charged them. The young men had to leap over the horned heads of the raging beast, or aspired to do so. Many young men were gored or trammeled, or gashed themselves upon the palisades. Those few who managed the acrobatic fear of leaping over the bull were crowned with berry stems and given a mushroom wine to drink. Those who were injured were tended and treated by healers. Many died before they could be tended to. Eseus never learned how many. And while he was not grateful that the men of Lorwynne were dead, he was glad they had not died for his cruel cousin’s idle amusement. Even so, it shamed him to sit and do nothing while Kareth giggled at the grotesqueries of the barbaric tradition that had been outlawed by his own father.
Kareth saw the horror on his face and smiled with pleasure.
“You disapprove, dear husband?”
“It is…a waste of brave men,” he said.
“Not so brave, half of them,” she said lightly. “Did you not see how they fled from the bull? That was their unmaking. You must not flinch or flee, but must surmount the obstacle directly. Without hesitation. There sit three young men who managed the simple feat. A goblin could have achieved it, had he the inclination, and so it is no great thing for mortal men.”
She turned to face him, then, staring into his eyes, her green-ice eyes unblinking and focused, yet empty of any feeling at all except, perhaps, the demand of obedience.
“But for you and I, Eseus, the bull we face would trammel the world were it not tamed by the steadiest and most ruthless of hands. You understand my will. You comprehend my aims. Will you be beside me on my chariot of Empire, or will you be detritus beneath its wheels?”
She did not give him time to answer. She simply turned away and raised her goblet, clearing her throat, impatiently, as a servant hastened to pour more wine, like blood, into the gaping mouth of the goblet. She sipped from it, staining her pink-petaled lips a darker crimson, then clapped her hands to call attention to herself, the soft impact of her dainty palms killing the festivities and music unto a solemn, wary silence. She then pointed to the bull still raging within the palisades.
“Tame the beast,” she said. “Make cold its heart.”
Oxenford soldiers hurried toward their task, carrying long spears. The bull was impaled all at once, then butchered for its meat and hide; its breath not yet vanished from the cooling Moor air. The head Kareth took for her own, esteeming it as a centerpiece for the wedding banquet table. Its eyes were still apoplectic with rage. It stared at Eseus, and he bethought he could see auguries in such dead, yet still somehow hateful, eyes.