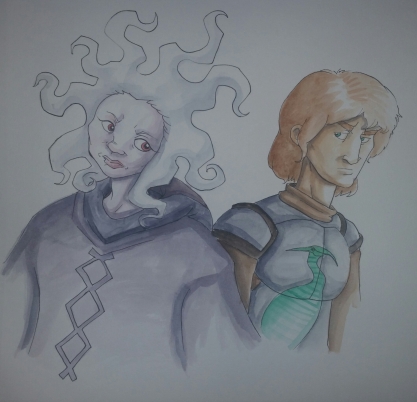 It was a fortnight before Commander Vant returned. His forces were less than half what they began as upon the outset of their raid. The remaining men, and Vant himself, were half-starved, bruised and broken men upon their emaciated horses. Vant shouted with a strained voice, demanding to be let into the castle. Paled and trembling, his head bandaged from a terrible blow, he looked as a dead man would look in defiance of his own death. His voice shrieked hoarsely with sufferings endured upon the moor.
“Let us in at once, you traitorous by-blow!” he demanded.
Eseus answered his commands with an arrow from his own bow. When it struck its mark, Vant commanded only blood—his mouth hanging ajar like a door upon broken hinges. He slumped off from his horse and collapsed to the ground. His remaining men fled toward whatever doom awaited them upon the moor. Eseus was gladdened to see them go, but he was wise enough to know that the true battle had not even begun.

Iadne held in her hand what appeared to be a clew, or ball of spider thread. She held it tenderly, as if it was the most precious of treasures.
“What is that?” Eseus asked.
“A future generation,” she said. “Many generations, I hope.”
They walked side-by-side up the stairs to his twilight-shaded tower. It had been a long day of preparations. Eseus had drilled his men once again in accordance to the strategies he had conceived for the approaching siege. His mother and Iadne had spent the day seeing that the common people were reassured and well-fed. They had roles, too, in the coming battles. They split wood, made palisades and arrow shafts and tanned leather for specific implementations. Their work, Eseus assured them, was as important as the roles the soldiers had to fulfill upon the battlements and in the bowels of the castle should the castle be penetrated.
It would all be bloody work by the end, he warned them, but as necessary as any harvest.
As a show of solidarity, Eseus ate along with the peasants and soldiers in the courtyard— when it did not rain— and often this meant a large gathering with cauldrons of stew served in common. Tents were raised on the green, and though they were not so comfortable as the cottages they were used to, the peasants did not complain. They felt safe within the walls of the castle, and safety let them sleep easier than any bed that might be bloodied or set ablaze by the violence of their foe.
It was one such night that Iadne sat beside Eseus and his mother, all surrounded by the people of Lorwynne. Many of them had seen the Spider clan girl before, and knew to respect her for having saved the heir of their late ruler. Even so, many of them furtively glanced at the albino girl and her tumult of hair. Though she had woven a new dress in the Lorwynne style, she had not managed to wrestle her hair into any braid that was not somehow worse than her normal disorderly array.
Eseus had to remind Iadne not to show affection in public. This admonishment often earned him a scoffing reproach since she claimed she was not overly fond of the idea of public affection toward him, or even private affection at times. Regardless, as the day dimmed and the stars shone through the dissipating clouds, Iadne sat close beside him while she ate. And while she ate, the Spider clan girl did not relinquish her clew, nor even set it aside, eating her chicken and vegetable stew with one hand while the other cradled the spider silk ball. Eseus stared at it briefly, but did not inquire after it. He knew she deserved to retain her own Spider clan ways, for she had made great strides to .
Many among the soldiers were curious as to whom Iadne would be wedded. They had heard Eseus’s pledge when she first arrived at the castle, and while she was beautiful, many of them dreaded the idea that Eseus would force one among them to wed her. For, while some men, such as Percevis, married the Spider clan women that sought the House of Lorwynne for a life, not many albinos existed in the world. And though Eseus did not share their superstition, many among the soldiers, and the peasantry, worried that she was ill-omened by way of her complexion.

The peasants, and even the soldiers, grew restless. They obeyed Eseus’s commands and did not leave the castle, but longed to be beyond its walls. They had slept in cottages their whole lives, yet had spent most of the day in the wide open fields. They grew restless, and sometimes old quarrels grew vicious while goaded by the walls and the crowds around them. Eseus had forbidden wine and beer while in the castle walls, but that did not mean the craftier and sneakier among the peasants had not hidden away such contraband. Two men— drunk on beer and old grudges and the belief that moonlight was as good an accomplice as any— fought upon the ramparts. Before soldiers could separate the two men, one was thrown from the high wall and fell to his death down below, in clear view of many witnesses. The other man, claiming self-defense, was bound in chains and taken to the green to await judgment.
Eseus, having been abed with Iadne—the latter of whom often hid beneath the bed at a knock at the door—was summoned to pass sentence on the killer. By the time Eseus had dressed and descended his tower to the green, most of the peasants were awake and awaiting the execution. Eseus dreaded such duties, as had his father. There was no sense of fulfillment in it, or purpose, or justice. It was what his father often deemed it: “The profligacy of the human animal.”
A hangman’s rope had been quickly made, and an eager axe sharpened. Eseus looked upon these two instruments of death sadly. To carry out justice was to bleed the beast for having bled itself. The anticipation in his people’s eyes saddened him even more. There was much shouting and clamoring all around. Some peasants shouted in defense of the living man at the expense of the dead man, whereas others decried the living man as a cold-blooded murderer while extolling the virtues of the dead man as a saint. Listening to the discordant cacophony, Eseus could only conclude one thing: that it was all such a bloody waste.
Eseus knew that to hang or behead the man would be to invite the worst sort of animosities among his people; some reveling in the spectacle while others vowed vengeance, thus dividing them and weakening his people as a whole. In truth, he wanted to postpone passing a verdict until the morning. Yet, to do so would be to let the peasants stew in their feelings until rancid with either bitterness or blood-thirst. His decision had to be swift and absolute, but also a compromise. It was a dilemma, but not one without a solution. He decided to banish the man upon the moor.
“A life was taken,” he said, “and so a life must be punished. Upon the morning we will banish the guilty to the moors. As for now, the dead man must be buried and the offender must remain in chains.”
Eseus said no more. His soldiers undertook their lordling’s decision while pushing back the rabble. Neither side was pleased, and so Eseus believed he had chosen the correct path for Justice. He hoped the man would walk out upon the moor and disappear however was wished by both sides in the conflict: as a man doomed to death upon the moor, or as a man treading with hope to live another day. The ghost of his decision would haunt Eseus for the remainder of the night, and would become a terrible phantasm with the dawn.