“I saw pale kings and princes too,
Pale warriors, death-pale were they all;
They cried—‘La Belle Dame sans Merci
Thee hath in thrall!’” 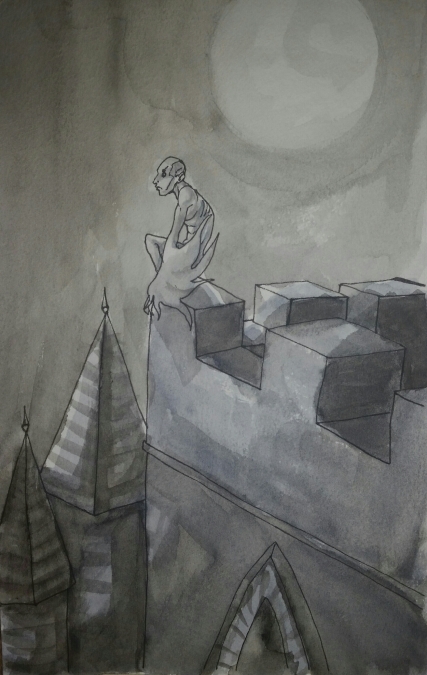 When we arrived at the Cainhurst Castle’s bridge we were met by silence. There were no forces awaiting us on that long stone bridge. Nor were there forces hailing us from the castle’s many windows. The wind skirled sibilantly against its tottering beauty, but apart from the elements we heard nothing. Snow fell, as if patting down the silence with its own immaculate hush. My unease grew in such silence. Yet, I was not certain what I was truly uneasy about: my own life and its potential loss, or our imminent disturbance into that silent, stony mistress that lorded over this land. It seemed sacrilegious to intrude there. This excited in me dread and euphoria, as one would feel in taking pleasure from one of Yharnam’s many whores— whether from her gaping thighs or her gaping veins.
The Castle was silent. The moon reigned above it like a skull-crowned monarch, glowing pallidly with its endless life.
“Have they alighted?” an Executioner asked, voicing what we all thought at that moment.
Master Logarius said nothing. He instead pointed wordlessly toward the portcullis. There was an audible gasp from someone among the Executioners. Perhaps it was from myself. Regardless of its origin, the gasp was justified, for the portcullis mocked us with its Pthumerian gawp, it being lifted— as if in betrayal—to invite us in to ravage the castle it was intended to protect. Perhaps, I thought, the Vilebloods had indeed alighted from the castle, seeking sanctuary in a distant land, or some distant sea. I hoped so, for I was in no mood for bloodshed upon such alluring grounds. We followed Master Logarius beneath the portcullis and into the moonyard of the inner walls. There was a water fountain there, frozen in the wintry wastes, and statues allotted here and there in intermittent clusters. To one side I saw the land fall away into a descending hollow that appeared to have been a cave once upon an age. The crush of rocks at the bottom indicated a concerted effort to close that passage. It begged the question as to what had been discovered there, and why it was feared.
The silence was unsettling. Indeed, it reminded me of still waters wherein a predator lurked, circling a fool oblivious to the teeth at his ankles. Instinctively, I drifted toward the center of our army, sheltering myself within our ranks. I feel no shame in admitting myself in want of advantage by their insulating numbers. They were, so far as my untested mettle was concerned, a mobile bulwark within which I might protect myself.
It was as we passed halfway between the portcullis and the Castle’s large, imposing doors that the sinister silence erupted into a clashing cacophony. Two large bodies of Cainhurst knights rushed us from afore and behind. It was a trap! To one flank gaped the hollow of crushed rock and to the other were the sheer walls of the Castle itself. Master Logarius was in front, and met the knights with his scythe, cutting them down like harvest-ready wheat. I had never seen such a terrible bloodletting before. His soldiers did no less in their efforts, crashing into, and smashing, the Cainhurst knights with their heavy Wheels. The Cainhurst knights were fast with their swords, but the Wheels overpowered their thrusts and slashes, turning them aside. Those whom were mounted upon horseback advantaged themselves of their height, slashing down at the Executioners below them. However, the Executioners were trained well— discounting myself—and soon overcame these knights by forming a phalanx with their wheels. Like a carapace of spokes and rims and hubs, they moved together, protecting each other while Executioners beneath them used their swords to cut the horses to stumps, thus throwing the knights for efficient dispatch. My brethren were coordinated and calm, even while surrounded in ambush. I had neither the collection of mind, nor the training of arms, to be of use in such a chaotic fray. I cowered among the Executioners, as a worm among armored beetles. Their power was matched only by their ferocious animosity toward the Vilebloods they smashed and mangled and mutilated. And their hatred was fostered by their faith in the Church. I was not possessed of such faith. I was an apostate.