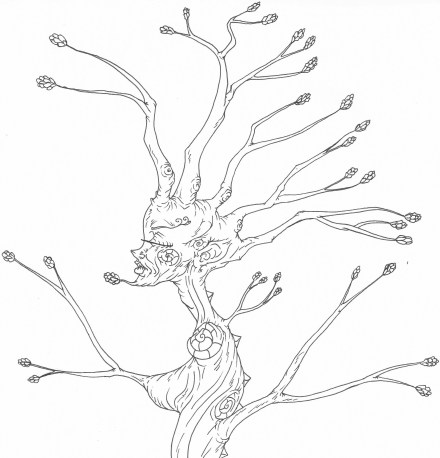 He thrums a dead druid’s drumbeat
upon the sadly humming heartwood,
the sap dried by the nearby hearth’s heat
while he stares out from the shadow of his hood.

Once upon a time she was a desirable dryad
upon which he could carve no lasting claim,
for her heart was triply-trunked, a branching triad
that grew in many directions without shame.

Throughout the abbey she had ensnared men
with her pink petals and fulsome fruits,
tempting his brothers away from Heaven
and suckling from them with her roots.

Beneath the shadows and the heavy cowl
he smiles sardonically, rapping his knuckles
upon the length of her body—her wooden scowl
etched harsh…deep…as he softly chuckles.

He had not resented her for being a goddess;
rather, he cared little for the souls of others
and he did not care if he was lost or godless,
anymore than had his wayward brothers.

No, she had rejected him, and his rut,
when he came to her to lust unto his fill,
and so he took up an ax and thereby cut
her pale bark so that the red sap did spill.

Now only he remains at that cloistered retreat,
and he takes his time to avenge his wrong,
her heart resounding with the rhythmic beat
of his own hollow, lifeless, unfeeling song.

Stephen Marshall. Writer, illustrator, layabout. Find him on Amazon, maybe. He has paperback and kindle books listed there. He also writes Supernatural Romance under the name S.C. Foster (because his fiancee pushed him to do so). He seems to have a knack for the Romance genre, much to his chagrin. Having pursued Children's literature he is particularly proud of his Children's novel series "Lost And Found", which begins with "Chloe Among The Clover", continues recently with "Stormy Within The Strawberry Patch" and may, in some future potentiality, culminate with "Candice Through The Picket Fence". These are novels for children (including his insistent nephew), but they are also written for adults who are children at heart. His short story collection, "The Eldritch Diaries", centers primarily upon Cosmic Horror and Body Horror, combining Lovecraft's mythos with the motifs of Sigmund Freud. His largest poetry collection, "Broken Crown Kings", contains over two hundred poems and two short novellas concerning the fleeting nature of the world and Man's place within it. Recently he has published a smaller book of poetry concerning Kentucky, Moonshine, and Ghosts called "Moonshine And Spirit Chasers". https://www.amazon.com/Stephen-Marshall/e/B07536QKD9?ref=sr_ntt_srch_lnk_fkmrnull_1&qid=1554215427&sr=8-1-fkmrnull View all posts by tanglerootblog