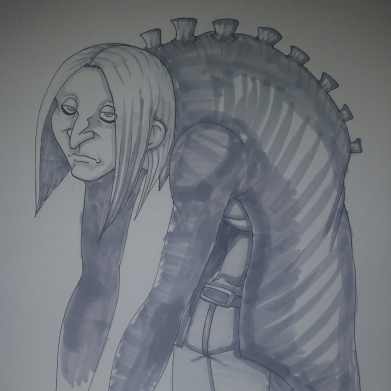 Ladderback Jack was as tall as a lamppost,
his spine reticulated, sharp, and longer than most,
his arms apish, hanging lax with lank hands
and fingers overlong from overactive glands,
his legs slender and knotted with knobby knees
while his greasy hair lay limp in any breeze.
He had a pale complexion, Jack did, like boiled tallow,
the whites of his eyes dull, waxen and sallow,
and he walked with his back hunched, bent double over
as if always looking for a rare four-leaf clover—
and Jack needed all of the luck he could get,
being an ungainly, gangly, graceless half-wit;
so much so that people said he was of the fairy folk,
born of a dimwit mother, herself a town-wide joke.
No one knew who Jack’s father could have been,
though they joked that it was Oberon, or some such kin.
As for his nickname, that was easily explained,
and once explained, that nickname remained:
when Jack sat down to relax in a ladderback chair
and then stood up, the chair would hang there,
hooked on his protruding vertebral pegs
as he pulled himself up onto his long legs,
and, so, crook-backed, overstretched, slack-jawed,
he was thought an entertainment as he shambled and hawed,
muttering to himself about finding his father in the sky
where the cloud castles, Fata Morgana, resided nearby.
“Jack, your father’s just a will o’ the wisp,” they’d laugh,
“so go look for him in the black bogs of a Kilt Gaff.”
Yet, though townsfolk laughed at him most days
they grew ever uneasy as he became set in his ways.
And then, one day, Jack asked to take for himself a bride—
the mayor’s daughter, Saoirse, her father’s pride.
Jack asked during the town’s Midsummer Fair
and thus everyone in and out of town was there.
The town laughed and laughed, whereas the mayor meanwhile
took umbrage at Jack’s presumption, commanding exile,
but even as Jack left amidst mean-spirited laughter
he vowed, in his quiet way, to have the last laugh hereafter.
“My father is both the Gate and the Key,” Jack said,
“and he will see that his line is hereby finely bred.”
The town returned to normal after the exile of Jack
and everyone forgot about Jack’s promise to come back
until one night when lights were seen in the midnight sky—
lights above the hills, each swirling like a firefly.
Jack came into town the next day, grinning ear to ear,
and walking, bold as brass, without any fear
up to Saoirse, holding a ring of strange onyx metal
and asking her to give to him, in return, her maiden petal. 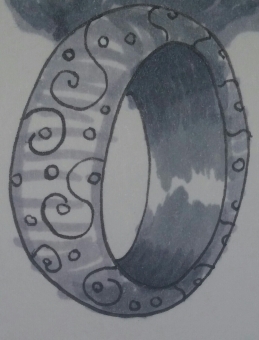 Saoirse was ready to call him an imbecilic cur,
but was suddenly transfixed by the ring held out to her.
Her father interceded, as did many of the local men,
and they beat Jack black, then blue, then black again.
“Go back to the hills, among the inbred Fae,”
the Mayor said. “Or you will hang from the gallows today!”
But Ladderback Jack was not of the fairy race,
nor was his father, that thing beyond Time and Space.
“My father,” Jack muttered, “is the Gate and the Key.
He is beyond the outer darkness, the stars, of all forms that be.”
And so the sky blackened in the middle of the day,
the villagers trembling to see the noonlight fray
as their town was pulled into a pocket of void, a world
unknown to Man, a place where madness unfurled.
Waiting for them there was a nebulous cloud of spheres
to which Jack pointed and declared, in worshipful tears,
“Behold! My father! The Lurker at the Threshold!
Behold what was, what is, and what will be! As foretold!”
The primordial sludge of luminous orbs and oculi
looked upon the people of that town, letting them see
in the fullness of its depths the endless cosmic chasms,
bathing their brains in luminous gulfs, the neural spasms
softening the meat of their minds unto a viscous pudding
and releasing them only after revelation could bring
them to confront the meaninglessness of their being
of which, ever thereafter, there was no unseeing…

To this day that village still remains, quiet and quaint,
all of the villagers vacant-eyed, imbecilic with its taint—
all serving silently, reverently, the bloodline spawned
from Ladderback Jack, that avatar-son of the Beyond.