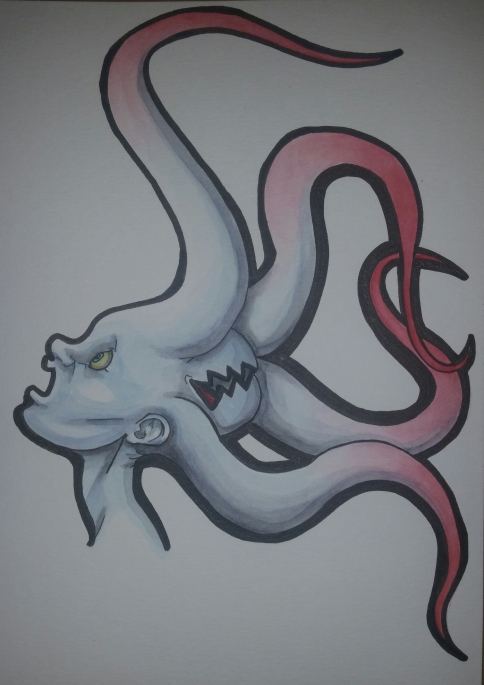 The Naturalization Of Lady Aeron

“Teach the sweet coquette to know
Heart of ice in breast of snow…”
—Thomas Pennant, Ode To Indifference

It was midday and the thunderheads dragged their pall across the earth, making midnight of the afternoon. Mr. Thenton and I were in the coach, quietly awaiting our arrival at the manorhouse of that infamous poet, Lord Aeron. Mr. Thenton had been trying to scratch ink on parchment, to no avail, and I busied myself with ignoring the dread I felt as we entered that Welsh province. The road was rugged and unruly. It rattled the coach as a toddler might a music box that refused to play. Nothing boded well for this misbegotten adventure.
While attempting to wet his quill, Mr. Thenton spilled the inkwell onto the butchered scrawl that marred the parchment’s surface. With a disgruntled sigh, he set aside his ruined parchment and covered his inkwell. He once again opened Lord Aeron’s poetry collection, The Gale Between Passion And Pain and read through another of its poems. At length, he closed the book.
“Certainly, he is a confessed bacchant,” he said. “These poems are superb in execution and style, yet shameless in subject. His poem ‘Caligula’s Reins’ celebrates so many depravities that I should think Ovid would demand restraint.”
Much to my relief, he extinguished the candle that burned nearby on its holder. I had feared for the last hour or so that the candle would topple and set flame to the coach’s interior, and to ourselves.
“I have always adored Wales,” Mr. Thenton continued, attempting optimism against his frustration. “Were it a woman it would be a belle with a disposition towards leisurely activities outdoors. Indeed, a comely nymph given to quiet walks and tending to the roses. And, of course, the flora and fauna are endearing. There is much to admire in these prospects.”
“It is idyllic,” I agreed, though it was difficult to see anything in the darkness beyond the window of the coach. “A perfect place for a stroll.”
“It would have been lovely to bring my wife with me,” he said, “but it is the unfortunate nature of a man’s work that it is woefully impaired by the presence of the fairer sex. That is, of course, unless the man in question happens to be the esteemed Lord Aeron. It is the happy situation of poets, novelists, playwrights and the like to always find inspiration in the company of women. Alas, a Naturalist’s office is one of minutest observation concerning explicit detail and not expressed emotion, otherwise Emma would have been a welcome adventurer in our party.”
“Gossip suggests to me that a young lady should not wish to visit Lord Aeron’s castle,” I observed.
“Of course,” Mr. Thenton said, adjusting his powdered wig. “I would not invite the rumors on my wife. Everyone is well aware of Lord Aeron’s scandalous reputation as a debauchee. If not for my national reputation as a gentleman among English society I would not have requested an audience with such an infamous rogue.”
“You did not hesitate to invite me,” I noted, watching impassively as the golden cuffs on his overcoat’s sleeves gleamed in the shadow-shrouded coach. “Were you not concerned with the effect on my reputation?”
The coach was tossed slightly to one side and I heard the coachman admonishing the horses with a few select profanities.
“Mr. Sheridan,” he said, “you are my esteemed colleague. True, you are Irish, and so are not afforded the defenses of English rank such as are privileged to my station, but you are protected by association. Moreover, what good would my best observations be in writing without your keenly drawn illustrations? The English audience demands word and image, the two working upon one another like two wizards conjuring wonders in the cauldron of their imaginations.”
“I have noticed you always become verbose when you are nervous,” I said.
“Indeed?” he said, surprised. “I never knew myself other than a very succinctly spoken man. It hardly conforms to my humble ego, such a revelation. Were you not my colleague, and thus known to me from profession, I would think it a captious assertion.”
“I do not theorize or opine,” I said. “I report what I see.”
“Verily?” he said, with a smile. “Then, may your keen observation skills prove their worth in this endeavor.”
He said no more, but smiled out the window at the passing scenery which, like his parchment, was a messy pool of inky blackness.