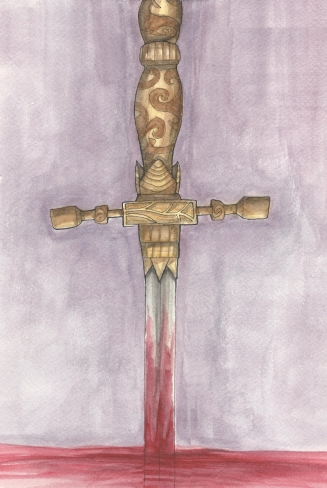 Shepherd with a crescent scythe,
wheelchair-bound in a field of flowers,
pondering the Dream, this unseeming life
beneath the Presence and its blood-drunk powers.
Brandish the blades, chamber the guns!
Summon the Hunters against the cursed
while throats thirst for the blood that runs;
a river swelling forth from Laurence, the First.
O Amygdala, scion of the Nightmare,
deliver us to the gravestone labyrinth
so we may witness the ritual in the red glare
whereby Mensis may cleanse us, bathed in absinthe.
May we Dream forever among the secrets of Kos
and ascend the fickle flesh and eclipsed thought,
seeking backwards, and forwards, the Primary Cause
of our making, our unmaking—what paleblood wrought.
Gift unto us Eyes, Eyes to see on the inside,
Eyes to see beyond this finite, futile plane,
and to see and seek beyond the stars, far and wide,
to bring humanity upwards into a new time, a new reign.
Let us make contact! Let us be enlightened
by the fungal crowns, the phantoms of stelliferous light
so, as the Pthumerians before, in tombs heightened
to serve you, above and below, beyond our beastly blight.
Let us not succumb, as those fools in the Choir,
nor the degenerates of Cainhurst and their vile queen;
let us instead endeavor righteously to aspire
for the greater good, as Rom does in the Lake’s sheen.
Ah ha! These beasts and their throaty ashen itch,
for which only a Waking death is the certain cure,
will wallow in the wayside, as corpses in a ditch
while we ascend, ascend, ascend— lightsome and pure.

Author’s Note:  I am a devout fan of the videogame Bloodborne for not only its addictive gameplay, but its ingenious reconciliation between Victorian vampire and werewolf tropes with Lovecraftian cosmic horrors.  Hidetaka Miyazaki is possessed of a brilliant mind for storytelling and I really hope the Bloodborne universe will be expanded upon in the future.  Currently I have been writing (gradually) a short story set in that deliciously monstrous universe and hope to finish it eventually for this blog.  Often I am scornful towards “fanfiction”, primarily because it is so often of such badly wishful wet-dream quality that I cannot stomach it, but this universe is so perfectly realized that it deserves (what I hope to be) a good quality story incorporating its myths and characters into a fully-realized and properly executed story.  For anyone with a Playstation 4, if you haven’t played Bloodborne, go do it.  I must have rage-quit three or four times before I fell in love with it, but it is a wonderful game.  As Gehrman says, “The night, and the dream, were long…”